In the Spirit of High John de Conquer

High John was born a prince in Africa, but then he got kidnapped to America, where he was sold into slavery. Somehow he avoided getting beaten as a slave, either psychologically, or physically. He always found a way to outwit the slave master, and do whatever he really wanted to do. High John went all over the South helping slaves. If a slave in Alabama was getting beaten badly, High John would instantly be there for him in Alabama, even if it was an 8 hour walk. He was a super hero in this way. High John gave us the gifts of song and laughter. Whenever someone said High John could not do something, High John would just laugh, and do it anyway. 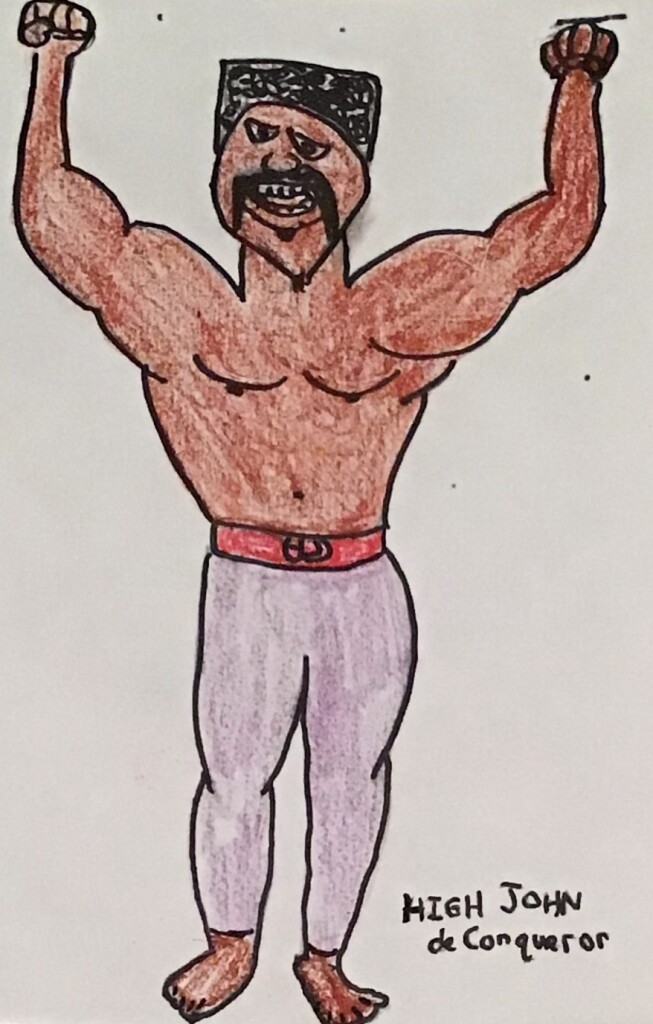 After the Civil War was over, and all of the slaves were freed, High John hopped on the back of a gigantic bird, and flew back to Africa, but he left his consciousness and spirit inside of a plant: a High John De Conquer root, also known as a Morning Glory flower. If people have a problem with racism, all they have to do is get a High John De Conquer root, put it in their pocket, or around their neck, and High John will be there to help. No matter what color someone is, if someone is fighting racial oppression, High John will always be there to help (Hurston, Chapter 3).

In Zora Neale Hurston’s book HIGH JOHN DE CONQUER, we find that High John offers a strategy for fighting racial oppression, and White Supremacy — nonviolently. Take for example the story about High John stealing Ol’ Massa’s young pigs, so he can kill and eat them. One day Ol’ Massa decides to stand in the dark and find out who was stealing his young pigs.

He sees High John kill one of his pigs, but he does not jump out of the dark and catch High John red-handed. He goes back to the Big House, and waits a couple of hours, until the pig is cooked; then he goes to the slave quarters and knocks on High John’s door. High John has to reluctantly let him in, and the whole house smells like cooked pig. High John knows it, and Ol’ Massa knows it too, but Ol’ Massa comes in, sits down, and decides to talk for a couple of hours, and then finally Ol’ Massa says,”John what you cooking?” High John says, “O just a weasely possum. Ol’ Massa says I want some of that on my plate, and he demands it, so High John gets up and lifts the lid of the pot to look. He looks Ol’ Massa dead in the eye and says, “In the beginning I put a possum in the pot, but if a pig comes out now, it ain’t my fault.” Ol’ Massa’s mouth was watering, and he was smacking his lips, but he couldn’t catch himself from laughing, and for a few seconds the two men saw each other and experienced a moment of equality together. Ol’ Massa realized how ridiculous High John sounded, trying to lie his way out of being caught red-handed, stealing, and he knew that if he were a slave he would have lied just like High John. Ol’ Massa gobbled up the plate of pig, and left High John’s house, but the next morning, ‘Ol’ Massa had pig for breakfast and instead of collecting the leftover pig scraps to be eaten later, he gave all of the house slaves pig, so they could enjoy eating pig too ( Ibid, Chapter 2).

High John fought racial oppression with art: culinary art; music, a singing drum; and comedic art—laughter. Thomas Jefferson, before he became the third president of the U.S., was a U.S. diplomat in France. While in France he paid for one of his slaves to go to a cooking school so he could learn how to do French cooking. A slave who could cook well was in high demand during slavery. High John was an excellent cook, especially when cooking pig, even though he did not go get lessons from a French cooking school. Even though Ol’ Massa caught High John red-handed stealing a pig, after he sat down and ate a plate of pig, the pig tasted so good that Ol’ Massa really did not want to beat High John because the man had good culinary skills that were hard to come by. In this way too, High John first helped himself get out of a harsh beating, but then he helped other slaves living and working at the big house.

All of High John’s stories end with a laugh. “Sometimes the laugh was on High John. Sometimes the laugh was on Ol’ Massa.“ Violence or show of force was not in High John De Conquer’s playbook. “High John De Conquer was playing his tricks of making a way out of no way. Hitting a straight lick with a crooked stick. Winning the jackpot with no other stake but a laugh. High John was fighting a mighty battle without showing force and winning his war from within. Really winning in a permanent way, for he was winning with the soul of the Black man, whole and free, so he could use it afterwards. For what would it profit a man, if he should gain the world and lose his soul? You would have nothing but a cruel, vengeful, grasping monster come to power. . . . They say that heaven arms with love and laughter those it does not wish to see destroyed. He who wins within is in the ”Be” class. Be here when the ruthless man comes, and be here when he is gone” (Ibid., Chapter 1). High John accomplished his mission of helping the slave to survive racial oppression and White Supremacy.

High John is also known for giving African-American people the gifts of laughter and song, but why are laughter and song such important gifts? Laughter and song have helped us to cope with and endure racial oppression. They have helped us not to give up or give in. They have given us the strength, hope, and courage to fight against White supremacy. High John de Conquer always battles from within. He knows he has to change the White man’s heart, and he has to change the Black man’s mindset for experiencing racial oppression and White Supremacy.